Well, here we are in the middle of awards season and last night was the 54th Annual GRAMMY Awards. What’s the best part of award season? The red carpet!  The Grammy’s, which are handed to out to salute musicians for their achievements, are usually a show filled with creative performances and an equally creative red carpet. Grammy fashion is typically more outrageous than anything you seen at other major awards shows but are also more glamorous than the MTV VMA’s.

This year saw a usual mix of glamorous and scandalous. Here are my picks for best and worst dressed. (With the exception of Nicki Minaj, I’m not wasting time posting a picture about someone who chose to be insulting to anyone’s religion with her choice of costume and escort.)

I think this the most glamorous dress I have ever seen her in! I love the color, love the shoulder and the drapery and ruching is just gorgeous. I still hate the lavender grey hair though!

This dress is lovely. It’s a great mixture of vintage style with the silhouette and modern style with the drapery at the neck. I just think her hair is wrong for the dress. It’s much too choppy to be flattering. It’s not pretty undone. 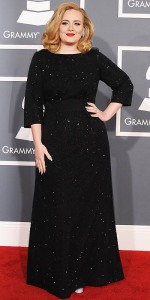 It’s beautiful. Simple, elegant, black, and sparkly- it’s perfect! And her hair is just great, too. She has a great retro feeling with this outfit but the softness of the hair helps keep it feeling young. 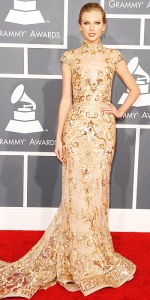 I love this dress.  The cut of it is stunning. It’s very elegant and modest (at least from the front, the back is a different story.) The gold embroidery on the gown is simply stunning. This dress is a more mature look than I’ve seen Taylor in before but by keeping her back and the makeup fresh she still looks like herself. She’s just the “Golden Princess” version of Taylor.

I loved this dress; in fact it’s my favorite dress of the whole evening. The shade of white is the perfect blue white. The detail is stunning. And I love the long sleeves! The train is just the right length, too. Her hair is great for this dress, back but not stiff. And I love the black purse with the white dress. 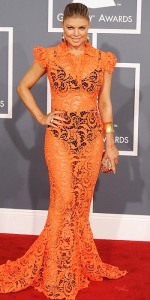 If a Cheeto could be an evening gown this would be it. Seriously, sometimes there are just some outfits that are just so wrong. Black underwear with an orange lace dress is just so sad. It looks like she’s trying to prove she’s still cool.

This is sad. I really hope she didn’t pay someone for this outfit. And I can’t stand the shoes. I would have rather that she wore dirty white sneakers than those monster boots

I like the fabrication of this dress and it’s really the perfect length, too. I like the sleeves. I just can’t stand the cut out and the weird napkin fold effect of the neckline. The origami on the front of the dress along with its odd fit and the fact the dress is so white almost make this dress feel like it was fashioned from a tablecloth.

I know Diana Ross is an old school diva with fabulous, over the top hair but this feels silly. I’ve seen her hair look lovely and this looks like a cartoon. I have always admired her fluffy, wild hair but this looks so sculpted. And the pantsuit with the wrist loads of bracelets-this feels very messy for Ms. Ross.

My style is not Rihanna’s style and that’s okay. However, I don’t even feel that this looks like her. When I first saw this picture I thought it was Nicole Richie in need of a hair color appointment. The hair color is so bad for Rihanna’s skin and it makes her look very generic Hollywood. And the roots! I can’t stand the roots. The dress isn’t great either. We’ve seen the barely there plunging black dress so many times I wonder if it should rank over wearing sweatpants for not trying it’s such a non-choice.

I really used to love Hillary’s style but in the past year I think she’s made some really big missteps. This almost looks like a mother of the bride dress. It’s a heavy fabric, with a lot of structure and a very serious color, which make it a very boring and old dress.

Wow, is Paris Hilton not only relatively modest but almost chic, too? I really almost like this dress although some of the placement of the beading is distracting. And the belt is cute but isn’t actually sitting in the right place to look its best.

The dress itself is lovely. It’s a beautiful color and it’s very much in keeping with the long sleeve retro style gowns that are very popular. But, the hair is just bad. If you don’t want to look like you are wearing clothes that are too old for you then it’s imperative to keep the styling young. And nothing says old like a blue beehive

I want to like this dress. I do. I always appreciate it when someone doesn’t have all of herself hanging out of a gown and the fit is nice. But the color of this dress and the embroidery look off. It’s too much gold and bronze with her blonde hair and skin tone. Is it me or does this dress look like the cheap knockoff of Taylor Swift’s gown? I think Miranda’s dress looks like the poor country cousin of Taylor’s dress.  I feel bad for Miranda. It’s not a true disaster but it is unfortunate.

We’re going to do something a little different when it comes to the fashion review of award shows.  I don’t feel comfortable reviewing women’s clothes, so while Kari reviews the gowns, I’m going to review the menswear.  I love Grammy fashion.  So often, at other snootier award shows men just wear the same boring, standard black tuxedo with the black bowtie.  At the Grammy’s the fashion is freer which means the successes are more fun, but the fails can be even more hideous.

Bruno Mars- Bruno has a real old school feel to him.  This outfit shouldn’t work, but somehow it does.  The odd pocket square, the too short pants and the lack of socks would normally make me scream.  The way he has styled it really heightens the retro feel of his image.  No one would have worn something like this to an award show in my mind in the sixties.  That use of this level of fashion, along with the sunglasses and his hair really make this outfit current, and award worthy.  Overall, it works. 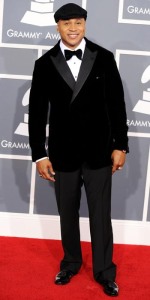 LL Cool J- I know I just talked about boring menswear consisting of a black tux and a black bowtie, but LL proves me wrong here.  The cut of the jacket is really flattering, and the extra button really makes the jacket more interesting.  The fact that it’s velvet and satin Armani gives it all the more pop.  The pants have the appropriate cut and fit, and the cap is a great touch that personalizes the look. What a great twist on standard menswear.

Val Kilmer- This looks like he wasn’t actually invited and had to use a tux he had lying around from years ago.  It just doesn’t fit.  The lack of the necktie looks sloppy and unplanned, like one was planned, but that didn’t fit either.  My final peeve is at the waistline.  His bottom button is unbuttoned showing his white dress shirt.  Just looks messy.  I almost forgot about the sunglasses.  Where on Bruno Mars they looked hip, here they look even more thrown together.  The whole thing looks like he just rolled out of bed.

DeadMau5- Who is this guy and why in the world is he wearing a beaten up mouse head?  I know this guy is some DJ, and it’s good to have different kinds of music represented, but I’m going to guess that DeadMau5 is just not actually dressing up at all.  This is probably what he wears to one of his performances.  If he goes out in public at all.  A weird t-shirt with normal jeans and sneakers is a real waste.

Swizz Beats- I just can’t decide whether I like this or not.  I know I wouldn’t ever wear this myself.  Does it work on him?  Yes and No.  It’s daring, but not a mouse head.  The bowtie is askew, but that can be easily adjusted.  The jacket looks a little too tight and only has one button, but he could have worn it open and that probably would have looked just fine.  The sunglasses are a win, but the pin on his lapel is a little off-putting for some reason.  Overall, it’s not my taste, but fixable if styled properly.  Kind of fitting since it seemed that styling of outfits really was the story of menswear at this year’s Grammy’s.