Okay, so you know how I said that we were going to try Pinkberry take home yogurt for Oscar night. Yeah, that didn’t happen. We went to our local Pinkberry where the gentleman working on our ice cream touched his face 4 times in the span of about 5 seconds. I got very upset. I don’t want the flu; I don’t want to get sick. And since I’m trying to stay super healthy since we are trying to conceive, I really was offended. They offered to make us another one but then I wondered how many people had touched their faces also. I know it sounds like I’m taking it to the extreme and that I’m sure worse happens in food places all the time. But, I can’t deal when the germ stuff is in your face.

So, that meant that at 5:30 with the show starting at 7:00 I had to figure out an ice cream alternative.  We started the tradition of eating ice cream and watching the Oscars last year so I wanted to keep it up. But, I had to think fast.  Salted caramel ice cream is my favorite and I needed a way to replicate the experience somewhat. Last years we had Ben & Jerry’s and we were totally happy with it and I had just seen a new brand of ice cream that was salted caramel in the store that morning. It was onward to Giant with a new idea: we would try several types of salted caramel ice cream to see if any could be as good as Pinkberry.  I already was disappointed that we weren’t going to get yogurt (because while ice cream is tasty it’s waaaayyy fattier that frozen yogurt) so it was a challenge.  I bought 3 containers of ice cream, some fancy sea salt (the grains where still a little too big in my mind) and we had our Oscar ice cream party.

Here’s what I thought of the different flavors 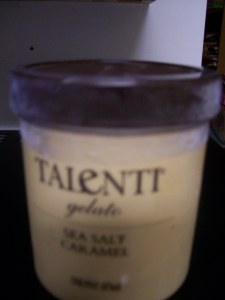 I hated this ice cream! It made me so angry! There was no salt whatsoever in it. And it had random chocolate pieces- little dark chocolate bits of strangeness. I love chocolate but I like to know that I’m going to be eating it. Also this product made me really mad because it tasted like Melted Worther’s Candies. It didn’t taste enough like true caramel rather it tasted really manufactured. And it cost 4.59!  The salt we added didn’t help hide the fake taste.

I didn’t like this ice cream either.  The base was just a sweet cream flavor. It did have slender ribbons of caramel but the sweet cream flavor was too overpowering to taste it. At least I knew there was going to be chocolate in this one. But the truffles weren’t very good. The chocolate didn’t taste good, they didn’t have much caramel on the inside and the salt was only barley detectable on one out of 3 sample bites.  When we added a sprinkle of our own fancy salt it still just tasted bland and not caramel-y at all.

To be totally fair I need to state that is my favorite ice cream that you can buy in a store. I discovered it last year on Oscar night. I love it! We don’t often keep ice cream in the house (it’s too hard to portion control) and this one gets me in trouble with the scale every time. The ice cream is caramel and there are giant ribbon swirls all throughout. It’s not heavy or just “sweet”. It’s delicious. And the salt added to helped it taste more like the taste I was looking for but it still wasn’t the same as Pinkberry.

Well, I am happy to report that I have had an incident free yogurt from Pinkberry. But I’m going to be a little guarded and hope that the talk the manager gave on hand washing and keeping clean really takes hold with that gentleman in particular. The ice cream tasting was fun but frustrating because 3 spoons from each really affected me on the scale and it wasn’t satisfying although it was filling. I hope Pinkberry take home yogurt will work for the Oscars next year!

So, due to circumstances beyond our control we weren’t able to have the take home Pinkberry experience that I promised way back when we told you who was going to win at the Oscars.  Instead, Kari ingeniously went out and got some different kinds of Salted Caramel ice creams, and compare them. 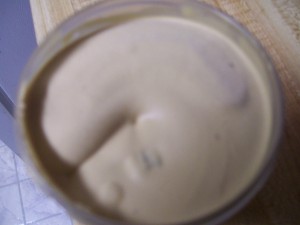 This one was sweet, but I couldn’t notice any salt.  None at all.  There’s chocolate pieces were good, but unadvertised.  I could eat this ice cream, but it’s definitely misidentified. If you’re expecting the salty sweet combo, you’re going to be very disappointed here.  It also didn’t have any caramel ripple in.  My least favorite of the bunch, and the most expensive, how disappointing.

This is my favorite in this test.  It’s not overly salty, but the taste is there, and the caramel ripple is very well done.  The ice cream itself here is a sweet cream (not vanilla), which sets the other flavors off nicely.  The salt is most evident in the chocolate truffles.  I don’t care what the website says about the ribbons of salted caramel.  It’s in the truffles.  I’ve got my eye on the rest of this container.  I like the simplicity of the combination here.

Ben and Jerry’s Dulce Delish with an assist

So since this is Kari’s favorite ice cream flavor ever, she had to include it.  Since it’s the only one of the three that doesn’t even claim to have salt in it we added some sea salt to make it an even comparison.  It turns out that adding salt to ice cream is a real art form.  Too much and you can’t taste everything else, not enough, and you wind up with Talenti.  The Ben and Jerry’s was very tasty.  Since it’s a caramel ice cream with a caramel swirl, the flavor is much more assertive than the others.  Swirl, by the way, is their term.  I prefer the more classic ripple as opposed to swirl or ribbons.  I don’t know what’s wrong with that term, but nobody uses it anymore!  This was really good on its, but it was clearly designed not to have the salt.

While I was looking forward to Pinkberry, I really have to hand it to my wife that she pulled off such a fantastic substitute.  I love tastings!  Did we leave out any good Salted (or maybe not) Caramel ice cream flavors?  Who’s your favorite?  We’d love to hear from you!