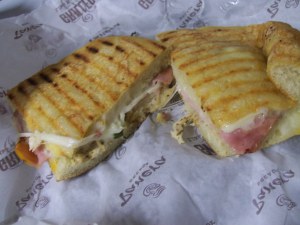 Who says there’s no such thing as a free lunch? We received the very happy blessing of finding a gift card in my wallet that we had been given by our bank a couple of years ago. It was awesome! Because sometimes figuring out what to do for Saturday lunch can be a drag since it’s our errands day. I had been trying to figure out something we could do relatively cheaply because we had no leftovers.  Thanks to that gift card, I got to try a new place to eat and I only paid 1.36 for lunch!

Panera was attractive (at least ours was, but it’s a corporate place so I imagine that when possible they strive for the same idea). It had various sizes of tables and even the two top table we waited for our food at was comfortable.  I can understand why it’s good for grabbing quick meals. I can’t imagine it’s really a good place to go if you expect to have a lot of deep conversation because it’s very loud.  It seemed clean which made me happy. But, I had a really big problem with ordering and a small one with service.  We hadn’t been to a Panera before and I thought the ordering system was completely chaotic. I don’t know if all Paneras operate like ours does, but I hope they don’t. Ordering from the separate statements, the pagers, servers who don’t know things about the other menu are a little too frenetic for a sandwich shop in my mind (especially an upscale one).  We were forced into dealing with a server from the bakery section who didn’t know things about the menu we ordered from and was somewhat rude.

I ordered the Cuban Chicken Panini. I love chicken! I had always wanted to try a Cuban sandwich so I thought this would be the perfect time to try it. First of all I loved focaccia I had never had it before and now I am so excited to get a recipe and bake my own.  I was worried the chicken was going to be too herby because there were herbs all over the chicken (with really big pieces which I’m not a fan of). But, it was really tasty I couldn’t feel the herb pieces in my mouth. While the meat was tasty I couldn’t pick out any flavors in particular. The meat was also very tender and moist. A Cuban sandwich typically also has mustard, pickles, Swiss cheese and ham on it. The sandwich came with mustard and mayo both of which I declined because I don’t eat those condiments. I was fine with the ham and the yummy Swiss cheese but I had a problem with the pickles. There were no pickles on this sandwich! You have to have pickles on a Cuban sandwich.  How did that happen? Thankfully since we brought the sandwiches home I added some from a jar in my fridge. I liked the sandwich okay before the pickle addition and afterward it was awesome!

The sandwiches are served with either chips or an apple. I was a little disappointed by this. I think of an apple as more a “dessert” item and I wish that they had offered a healthful alternative that was more savory (a vegetable). I tried one of RJ’s chips and they were pretty boring. They were typical generic sandwich shop bland, overly crisp chips. I got the apple and that was a big mistake. It was a horridly small and bruised apple. I didn’t eat it because it looked so unappetizing. I tried to simply decline a side item when ordering but they coerced me to take the apple. I felt bad wasting it but it looked awful.

RJ ordered the Smokehouse Turkey Panini, which I totally hated. It tasted almost like bleach. I don’t know if the turkey or the bacon was the chlorine tasting culprit but it was really bad. I have never had a sandwich that tasted more like a swimming pool. I didn’t like the bread that RJ’s sandwich was on as much as the bread on my sandwich.

I would probably come back here but I don’t think I would be a regular. It seems to be a popular place with people our age and our church family, too. I really liked my sandwich but I can’t get past how bad all their food is for you ( take a look at the yummy items fat and calories). I also think that it’s a little expensive for the quality of food and service.  I’m trying to take care of myself to help along our efforts to have a baby and if I want to have a splurge I probably wouldn’t pick a sandwich. But, if the situation presents itself I would eat here again and I would be open to trying breakfast too.

When you first enter into Panera, it can be quite overwhelming.  The first thing you see is all of their delicious breads and pastries.  There are two lines, you can order everything from both line, but each specializes in either the baked goods, or the sandwiches and soups.  I would pick your line carefully.  Our order taker in the pastry line meant well but wasn’t very helpful guiding us through our order.  Also, get a paper menu if you can.  The menu boards don’t tell you very much of what is actually on your sandwich.  Instead it lists only the names, prices and about five words about your meal.  You are then given a number, and whether or not you eat in or carry out; you pick your order at a separate line when your number is called.  The whole process feels a little like the soup nazi episode of Seinfeld.

The food itself is a much better experience.  Kari ordered the Cuban Chicken Panini, but without any sauce.  When we got home we discovered that they had also left off the pickles.  The sandwich was great anyway.  The chicken was seasoned very nicely.  From the appearance of the chicken, I thought it would be over spiced, but I was wrong.  The Swiss cheese really complimented the chicken and the ham.  The Focaccia is a perfect addition to this entrée, and takes the pressing process very well.  Kari selected an apple as a side dish, but it didn’t look as appetizing as the rest of the meal, so I didn’t try that.

I got the Smokehouse Turkey Panini with a bag of potato chips on the side.  I really liked my sandwich, but the chips were nothing special.  I also went without the sun-dried tomato ale mustard so that Kari could get a taste of my sandwich.  I didn’t miss it.  The turkey was moist and delicious.  The bacon was cooked to a turn.  Oh, how I love bacon!  The smoked cheddar played nice with the other flavors.  The Three Cheese (Parmesan, Romano, & Asiago) bread added a nice bite when pressed, but wasn’t difficult to bite through.  The flavors really melded together nicely in my mouth.

The sandwiches were well executed, but to be honest, these sandwiches would be pretty hard to mess up.  Having not tried any of the sauces, I can’t judge if those flavors enhance or diminish the end product.  Still, a pretty good meal.