On The Road: The Partridge and Pear Restaurant 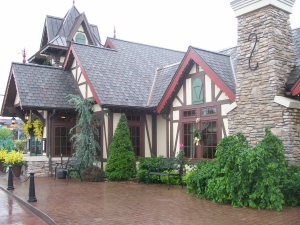 The Partridge and Pear Restaurant

She Said: The Partridge and Pear Restaurant

Last year we had a somewhat disastrous stay in Pigeon Forge and the dinner we had at this restaurant remained a good memory for us.  It’s really hard to find a somewhat dressy restaurant in the Pigeon Forge/ Gatlinburg area. When I go out for a romantic dinner I don’t want to deal with a salad bar or BBQ. I don’t always want steak for a romantic dinner. These requirements make finding a romantic dining spot in the Great Smoky Mountains very difficult.  We remembered being tucked in our cozy table with the glow of the roaring fireplace so even though the menu had drastically changed we decided to brave another visit to The Partridge and Pear Restaurant in search of something romantic and special. It ended up being a very bad idea to go here.

I love the décor of this place. It’s such a cute little Christmas themed chalet. I love it!  It’s full of cute Christmas signs, paintings and object d’art. It was a rainy, cool day and I expected the fireplaces to be roaring- nope. The Partridge and Pear Restaurant is a part of a store (The Incredible Christmas Place- which I loved as a little girl) and hotel (The Inn at The Christmas Place- a nightmare, don’t go there) mini empire. While I loved shopping there as a little girl, and even though I’m a Christmas decorating fan I don’t actually like it anymore. I get depressed seeing Corona bottle and man cave Christmas decorations. While the restaurant used to be sweet, I think it’s succumbed to the lackluster quality of all the Incredible Christmas Places of business. The only part of the décor that amused me past the first 5 minutes was a set of prints of the 12 Days of Christmas and trying to remember what all the chefs of Top Chef Season 5 made for the 12 Days of Christmas challenge (we were that bored!) 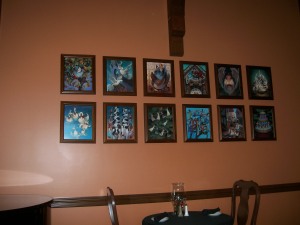 The service was terrible. I know our waitress was trying her best but it’s ridiculous to have to wait more than 10 minutes to order and more than 30 minutes for two sandwiches. We could have gotten similar sandwiches from Panera and they would have been better, cheaper, and ready in a fraction of time. We were seated near a large table of customers who were very dissatisfied with their food. I complain when my meal is bad, too. But, the staff at the restaurant should be ready to handle complaints and they seemed to just make service for everyone grind to a halt. We waited and waited for everything here. It was almost painful to sit cold and hungry as much as we did.

We remembered the spinach and artichoke dip and were especially looking forward to it.  It was full of so much chopped spinach that had such a great flavor we actually ate it with forks last time. When it finally got out to our table we saw it was not the same dip at all.  It was cheesier and there was much less spinach with much less flavor. The tortilla chips were also a little saltier than they had been before. But, it was hot and creamy and we were starving. Then, I found a long blonde hair in my dip. DISGUSTING! I don’t want anyone’s hair in my food.  The waitress took it away and off of our bill, but it was still really gross. It’s almost insulting to get hair in my food. I feel like restaurants think that I’m good enough to take money from but not good enough to deserve cleanly and carefully prepared food. Everyone deserves clean and well-prepared food.

I had been craving country ham so I ordered the country ham sandwich. It wasn’t good at all. The country ham was shaved much too thin to be appealing. Country ham is better eaten in one piece (like a thinner ham steak). Shaving and mounding the ham actually accentuates the salty quality. The cheddar cheese was of good quality but it wasn’t distributed enough to actually mellow the flavor of them ham. The sandwich really needs to be served with some tomato because that would help cut the salty taste and give a better variety of flavors. They offered mustard or pear butter ( but  it had cranberries in it which I can’t eat, I’m super allergic to cranberries) so it would have been nice to offer some fresher sandwich toppings like lettuce or tomato. I thought it was really weird that it was served with a mix of sweet potato and regular fries (I guess that’s what Christmas fries mean).  The fries were a little bland, but I was starving so I ate them.

RJ got the saddest little Cuban sandwich you have ever seen. I’ve only recently started eating them and I love Cuban sandwiches, but this sandwich was just small, cold, hard and tasteless.

I hate to say it because it’s such a sweet little place and was a really good idea for a restaurant. But I can’t imagine going back here. Maybe if someday years later I read that things have completely changed then I would think about it. But, it’s really very hard for me to get over a hair in my food. 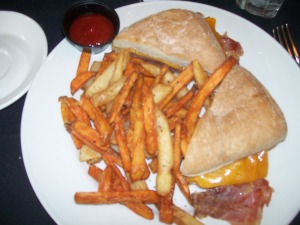 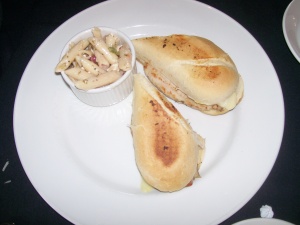 He Said Partridge and Pear

Going to Partridge and Pear was going to be a nostalgic experience for us.  Last year when we came to Pigeon Forge for Valentine’s Day, eating here for dinner was one of our favorite parts.  Unfortunately it’s changed a lot since then.  I really enjoyed that last time we dined here it felt like we were having an upscale experience in the Smoky Mountains.  This time, there was none of that.  Gone are the breadbaskets of cranberry bread, to be replaced by fried pickles as an appetizer.  Not that I have a problem with simple fare, it’s just not was I was expecting, or had enjoyed in the past here.

Apparently the kitchen was having a lot of problems that day.  There were three tables of patrons where we were dining, and all had their order messed up somehow.  I feel bad for the waitress, but it took forever for us to get our orders in and get drinks and finally food.  Not quite as long as the dinner at the Carlyle Club took, but it was starting to feel that way.

Thankfully they still had the appetizer that we loved so much last time, the Spinach Noel.  The house made chips were a little saltier than before, and the dip itself was a little oiler, but it was still very tasty.  Until we found a long blonde hair in it.  The waitress apologized and took it off our bill, but it was still very disappointing.

Kari ordered the Shaved Country Ham & Cheese.  It was pretty salty, but I found it enjoyable.  Kari passed on the Dijon mustard and pear butter that serve as it’s condiments, that might have helped with the salt some, but I have no idea.  As her side she had the ‘Tis the Season Fries.  This was passable, but what the menu didn’t tell us is that it was both traditional fries and sweet potato fries.  It was a very generous serving.

I ate the Cuban.  Ham, pork, swiss cheese, pickles, and yellow mustard.  Sounds promising, right?  The pork was dry, and the sandwich wasn’t pressed very well, denying me the trademark crunch I was looking for.  My pasta salad tasted pretty good, but the portion was way too small when compared to Kari’s fries.  I really felt cheated.  There were also some very small pieces of ingredients that I couldn’t get out of the ramekin it was served in further limiting the actual portion.

I wanted to get dessert because I was still very hungry, but we decided to go elsewhere because we’d been so disappointed.  Normally, I might complain to a manager, but I just wanted to leave and never come back.

Spinach Noel Rating-7 (If you don’t get a hair!)