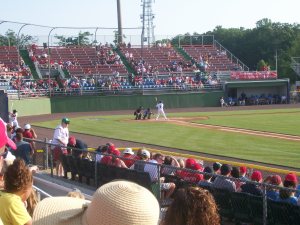 I’m always looking for ideas for great inexpensive dates. I dream about the days when we can just go out anywhere we want and buy tickets for the shows we like as soon as they are announced.  But, for now I try to find things that can be fun and relatively cheap. I’m also doing a 101 things in 1,001 days challenge and I am supposed to see some baseball games (it seemed like a good idea at the time I wrote the list). When I heard that Memorial Day was going to be Dollar Monday for our local minor league team the Potomac Nationals I thought it seemed like a great idea. It turns out baseball while fun is also a sport that isn’t enjoyable for someone with increased sensitivity to heat.

The deal that the stadium was running was for one-dollar grandstand seats and one-dollar hot dogs. That sounds like a good deal. The seats we like to sit in typically cost 14 dollars (which is still pretty economical). I really didn’t like sitting in the grandstand because I was really jostled and it made me dizzy. Also, it really hurts my back to not have something to lean on if I’m going to be sitting in one position for a few hours.  I’m glad that the tickets were so cheap because they are really uncomfortable.

I have a complaint about cost of things in general. I know I’m not the only person who complains about stadium prices but seriously they are gross. We paid 5 dollars for parking. Okay, that’s not too bad. But we also paid $4.50 for a bottle of water! That’s gross. It tasted nasty and plastic and cost way too much! I was really mad at that. We had 20 dollars that my grandparents gave us for our anniversary and the water ate a big hole into our date night money.

I was looking forward to the hot dogs, but they weren’t that great. Before my palette refined to its current status I thought they were tasty. But, I was glad they were only a dollar. I just wish they would weigh in the scale as cheaply! I was mildly interested in a funnel cake but they were 5 dollars and it was so hot. I thought about dippin’ dots but frankly they aren’t that great. They are cold and they are cute but they aren’t really tasty. We smartly saved our money and got ice cream elsewhere when we left the game.

It was so hot. Well, it wasn’t just hot. The brightness was actually the problem. I wish the stadium had some kind of awning of shelter from the sun. I felt broiled with a heavy coat of sun block, a hat and holding the program above my face (plus my hand fell asleep, twice). We also happened to be seated near some people who were cousins of one of the players. They were loud, rude, racist and very stupid. I was so glad to leave early to get the chance to get away from them. There is nothing wrong with cheering on a team but people need to have respect for those around them who may not want to hear their ugly verbal spew. I’m very embarrassed that people have so little regard for themselves that they would act in such a fashion.

I’m glad we tried it because I still have two games left that I need to attend and now we have a better idea of where and when to go. I think it’s great that they offer this deal. If you love baseball and don’t mind not having a seat back it’s probably a great deal.  I have to be careful about getting burnt and overheated because of my health issues so the ballpark isn’t a friendly place for me. I wanted to enjoy it like I had in the past and maybe I’ll go back again but I won’t sit in the grandstand. 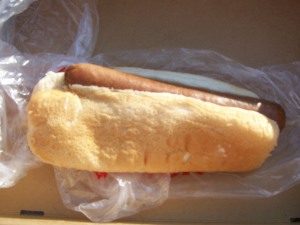 yep, that’s a dollar’s worth of hot dog (RJ liked them but I didn’t)

I love watching baseball games, but they can be so expensive to go see a professional team.  With the Washington Nationals in first place right now, it would be nice if there were a cheaper alternative.  Kari and I typically go see the local minor league team, the Potomac Nationals (or P-nats), and it’s a fraction of the cost.  Our seats are usually about $15 each.  When we found out that you could get a seat for a dollar with dollar hot dogs on Memorial Day, we weren’t going to miss that.

The biggest problem is that you don’t actually get a seat for a dollar.  You get to sit in the grandstand.  For those of you unfamiliar, like I was, that’s bleachers.  So you don’t get a seat back, which can be quite uncomfortable for a whole baseball game.  Also, it was pretty hot.  There was a heat advisory and not a cloud in the sky.  So it was broiling.  The earlier start time for minor league games (first pitch was at 6:05) meant that it was hotter when the game started.  Yuck.  The low cost also led some people to spend that extra dough on beer, which is not what anyone needs.  These guys who may or may not have been cousins of third baseman Justin Bloxom were yelling a lot of incoherent things that dissed both sides and didn’t make any sense.  It’s like they heard a dollar and thought it would be fun to come and scream themselves hoarse, but didn’t have a favorite team, and didn’t care.  They actually gave a poor employee a hard time when he came around trying to get people to buy balls to throw on the field after the game to win prizes.  On our way out we saw them coming from the concession stand with more beer.  Because that’s what they needed.  More beer.  Right.

I liked the hot dogs and could have eaten quite a few of them.  Alas, we were both uncomfortable, and the Pnats weren’t playing well anyhow, so we went home after the fourth inning.