He Said and She Said:  Olympic Fashion

The Tower Bridge during the Opening Ceremony fireworks of 2012 Summer Games in London- image from nbc.com

Kari: It’s time for the Olympics! Get excited, right? Well, I’m more of a winter Olympics fan so it’s not quite an exciting time for me.  A reader asked us if we were going to do a write up of Olympic fashion for the opening night games and we thought it was a great idea. The opening night ceremony and parade of nations had plenty of fashion moments, good and bad. However, in the spirit of Olympic unity we are only going to be talking about the positive fashion moments that we saw. Well, with the exception of our own Team U.S.A athlete’s outfits. We support our team of athletes but do not like anything Ralph Lauren did for or to their outfits. We’re also going to be mixing this post up with both of our opinions for some looks (since the outfits were worn by both men and women). Let the Olympic fashion parade begin!

Kari: Okay, this isn’t a country at all. I just had to mention two accessories that I saw during the Opening Ceremony that I thought were really cool. Team Holland wore the most beautiful boutonnières that I have ever seen. RJ and I were both struck by how big and bright the tulip blossoms were.

I also have to give kudos to the most ubiquitous accessory. This is one item that crossed all countries and cultures shared: the camera. It was so awesome to see people from nations all over the world taking their own reaction shots while marching in. It was a really unifying moment and what a souvenir they’ll all take away! 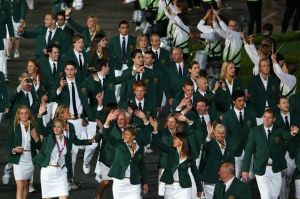 Kari: I thought these team uniforms were really cool! I loved the hunter green jackets. Such a dark color could really make an outfit end up looking like a fall or winter ensemble. I think pairing the jacket with white shirts and either white skirts or pants make the look perfect for summer. I love that women had the option of a pretty print scarf whereas the men wore dark ties. I hate wearing ties and would be much happier in a scarf! I think these outfits manage to look both confident and breezy!

RJ: Belize chose to use their national colors very well here.  The white pants work well, and draw your attention to the jacket.  I love the jacket.  The blue with white accents is something I would love to wear.  The blue in the shirt, the tie, and the hat band all work well together, and don’t clash.  The hat is a nice touch as well.  This is really fun.

Kari: I’m sorry to have to jump in here. I think the athletes from Belize look nice. I just have to ask who designed these hideous dresses with the faces printed on them. I think that they look terrible. So many teams did a great job of really showing off their athletes and to be forced to parade with these almost creepily printed dresses really ruined some of the lovely pageantry for me.  (I don’t care if they were volunteers; faces of random people on dresses look terrible!) 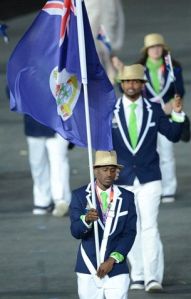 RJ: What really makes the Cayman Islands stand out is the Green tie.  It’s a great pop of color that keeps them from blending in from others.  Their hats are kind of unique as well.

Kari: I love the red sweaters! They are so cute! I think the full navy skirts are paired very well with the sweaters. This look seems patriotic and unified but doesn’t look like a uniform for school children! 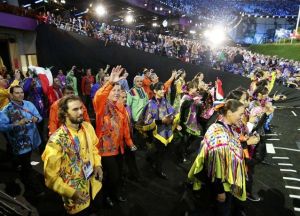 Kari: I love the ponchos! They are so beautiful! I have loved ponchos for years. Yes, I even own a couple of fashion ponchos. These are so richly colored and perfectly festive. I can’t help but applaud Team Mexico for such a great choice!

RJ: I love these colorful Nehru jackets.  The best thing for me is that the culture influenced this more than the flag.  The flag of Mexico only has three colors on it, but their Native American history is full of these bright primary and secondary colors.  This was the best of the night for me.

Kari: I was crazy about these outfits from the moment that I saw them! They are so beautiful. The lovely green and the crisp white look so fresh and happy.

RJ: Here is possible the most dapper Olympic look.  The suits are crisp, and even though I prefer color, the white really makes them look more relaxed.  The hats dress up this outfit, and make it as a whole.

Kari: I can’t stand these outfits. What was Ralph Lauren thinking? These look like 80’s prep school kids on a European tour. I know Ralph Lauren has been to Europe more times than I ever will, but I can’t help but feel like these outfits look like some ignorant persons idea of what an international traveler looks like. I love berets but this one isn’t even a terribly good shape! And I must ask, why, why the boxy skirts?

RJ: Could someone please tell me why we needed a big name designer to come up with this outfit?  It looks like something just anyone would wear at the Hamptons.  The overall look feels very nautical, which is an odd choice since there aren’t very many nautical events at the Olympics (are there any, besides sailing?).  It feels very stuffy, one note and elitist.  And the berets don’t feel American, (even though Green Berets wear them, the effect is different here) they just feel pretentious. 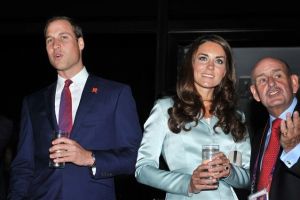 William and Kate
image from nbc.com

Kari: Okay, they aren’t a country at all. But, they are one of our favorite couples and they are always very well dressed. I absolutely adore Kate!  I think the icy blue coatdress is a great outfit for this occasion. It’s full of pomp and pageantry but a gown wouldn’t be appropriate. The color is lovely for summer.  Kate also knows how to work a fabulous pair of earrings (I would love a pair like this!).  I think it’s lovely that she selected an outfit in keeping with the tone of the occasion in mind, but not selecting something that made it seem like the night was about her. I would totally wear this outfit to a wedding!

RJ: I really like his look here. Prince William’s  suit fits perfectly, and it’s a beautiful shade of blue.  His tie has a unique multi colored feel, and the lapel pin shows just the right level of patriotism.  He still exudes royal cool here, while the color palette still says “Go Great Britain!”