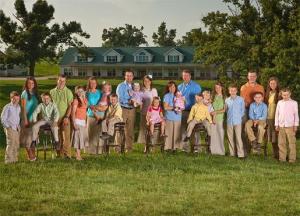 The Duggar Family from 19 Kids and Counting
image from tlc.com

She Said: 19 kids and Counting: Season 6

I’ve been a fan of the Duggar family and of however many kids and counting they’ve had at the time(17 Kids and counting, 18 Kids and Counting, etc ) for a long time. I usually love their episodes. Even though I don’t agree with them about everything (I’m wearing a tank top and shorts while listening to Benny Goodman to write this post), I used to get something positive out of the episodes. I have to say the season six premiere really left me cold and feeling like I hadn’t ever made a pure decision in my life. The episode felt really preachy and judgmental. I also felt like I wish someone could rescue those girls and teach them to rely more on their Heavenly Father (who is perfect) and less on their earthly father (who is most definitely not perfect). This season, I don’t know how I feel about 19 Kids and Counting (which airs at 9:00pm on Tuesdays on TLC).

The episode title “Duggars Down the Aisle” was very misleading. Yes, some of the Duggars were in a wedding so therefore they did go down the aisle. But, the last Duggar wedding was four years ago. And I just feel so bad for those girls. How are they ever going to meet the men that God has mind for them. Yes, I know that God can do anything. But, I also believe that sometimes when we don’t listen to Him we can miss out on things. I worry with Jim Bob self-appointing himself to determine if the girls will be a personality match with a prospective suitor (I’m sorry is he a matchmaker or a psychologist?) that they will NEVER be able to have lives of their own. It was so upsetting for me to watch them sitting so defensively while they parroted things that I’ve heard others speak into them. My heart aches for these girls. I wish that they could see that their loving Heavenly Father can protect them while they go find their life. Am I saying to cut out their parents? No, it’s always a good idea to keep in contact with people who you feel will support you spiritually an emotionally. But, why can’t they go to college? Why does a 22-year-old woman need a 15-year-old girl as an accountability partner to babysit?  It just breaks my heart that I feel they carry too heavy a burden of “what if” consequences instead of being taught positive responses to romantic situations.

The wedding itself was pretty cute for a super-conservative wedding. I like the red bridesmaid dresses, which looked almost normal. The Bibles in the bouquet sounded like a good idea, but they looked too thin to be actual Bibles. Priscilla seemed so excited that it was almost fun to watch that part. I thought some of the photos they took looked really cute, too. Everyone once in awhile I would catch the face of an older Duggar girl and wonder if it was a hard day for them and it made me sad.

I don’t think that Jim Bob wants the girls to get married because he’s selfish. I think he wants those girls to stay home because they help the house run smoothly and he wants to keep them. I think the true measure of a parent is one who understands that God gives you your children’s ears and hearts forever, but you have to let your them go and live their own lives, too. After all God Himself, let go of His own Son, too. And imagine if Mary had been unwilling to ever let Jesus leave home. What if the Apostles mothers had never let them leave. What would the world look like if it weren’t for God honoring parents who let their children leave and find their own way? Of course parents should raise children to honor God with their lives and hope and pray for them. But, you have to let go, too.  I know God doesn’t require that everyone be married, but I think everyone should have the option to find the spouse that God intended for you.

I don’t know how I feel about this season of 19 Kids and Counting. In the past even though I’ve disagreed with them about small things (fashion, dancing, music) I still felt very encouraged from the similarities we share as Christians. This season already feels very political and rehearsed. I have heard the Duggar girls are writing a book based on courtship and it seems like they are really trying to set them up as experts. But, how can they be experts? They aren’t married and they’ve never dated. Why would you take advice from staying pure from someone who practically stays locked in a tower with a Dad doing dime store personality analysis at the gate? If I were a young girl I wouldn’t care what the Duggar girls had to say because they couldn’t offer me counsel. They’ve never been in enough situations that pertain to relationships to know anything. I’m really frustrated with the show. I don’t know if they are back too soon after Jubilee’s death and they are still grieving so much that it’s all façade. It feels so forced and so political, like they are trying to win a campaign for best family. I liked them better when they were more real. I feel like all I ever hear from their mouths are speeches or frankly, rude sarcasm and judgment.

I‘m really glad that we’ve gotten to watch United Bates of America. It’s been great to see a family that actually does seem comprised of people who are both Christians and individuals. I applaud the Bates family for actually letting their children go to college and for knowing that God (not the parents) is who should be giving their direction.  I’m sad that United Bates of America only has two more episodes. I’ll be watching 19 Kids and Counting and hoping it improves, but I fear that spark of what made them different is gone.

He Said: 19 Kids and Counting

When I wrote about United Bates of America, I talked about how when you watch a family over a longer period of time, all of their cracks begin to show, and you start to see more and more of the negatives of that home.  I was talking about reality shows in general, but it’s really true about the Duggars.

In their time on the air, we’ve seen the Duggars go through a lot of ups, and some downs as well.  We’ve seen many births, and even a wedding.  We’ve also experienced Grandpa Duggar dying, complications from the birth of their youngest child Josie, and last season was fatalistically focused on Michelle Duggar’s second miscarriage.  I do admire them for showing us everything that goes on in their life, but the more we see them less I like the family.  I appreciate their bible-based rules for their home.  I don’t appreciate when I see teachings that have no biblical basis, but are treated with the same level of reverence.

When I see the way that Jim Bob treats his older children, especially the girls, it hurts my heart.  He looks to have no intention of helping them meet anyone to marry any time soon.  He also treats them like toddlers that can’t leave his sight lest something bad happen to them.  The Duggars have the firm conviction that if left alone, these otherwise super responsible women that are cooking all their food, teaching their children, and handling all the day to day running of their home, and trusted with the passwords to use the internet will do some unspeakable act.  I think that attitude is unchristian and unhealthy.

He filters out anyone who would be interested in dating his daughters based on many criteria, some of them valid, including faith in the lord, and if he thinks their personality will mesh with the girl they’re interested in, as we see a simulation of in this very episode.  All this appears to be based off of the principles in Before You Meet Prince Charming: A Guide to Radiant Purity.  Notice that the reference here is to fairy tales (which were never real) not the Bible (which is).  It sounds like the specific fairy tale they’re referencing must be Rapunzel, because the Duggar girls, to the best of our knowledge, aren’t promoted in any way to find a spouse.  This seems really selfish, considering that as long as the older girls are living at home then the parent get free childcare.

Now these girls, who have never had a serious boyfriend or courtship, have written a book about how to find a man.  I don’t understand this.  Last night’s episode featured a lot about what the girls are looking for in a man.  It’s just another example of this show becoming less and less about a ministry for this family, and more and more about pushing certain political views (the whole family infants and all campaigned for Rick Santorum shortly after the miscarriage) and cultural ideas like courtship, that can be very detrimental to ever finding a mate.

TLC promoted this season premiere by talking about how as one life ends, another changes for the better.  They were talking about a marriage, but not one of the Duggar girls.  The wedding we’re celebrating this time is one of their in-laws.  This serves to highlight how sad the oldest daughters’ situation truly is.

As I said before, I like the Bates much better.  The Bates are not only more interesting to watch, but also they are a much better witness to others about being a Christian, and what’s important.  As a contrast to this, the night before the episode of  United Bates of America featured the Bates hosting parties every night at the big home school conference they go to every year.  It was agreed by all the older Bates children that this was a great way to meet a spouse.  It can be done, you can be Godly in your actions, and still look for a mate.
Rating- 3

One thought on “TV Time: 19 Kids and Counting: Season Six”