Any MTV awards show is never a sure fire fashion dream. In fact most of the time MTV awards shows are filled with dubious fashion and scandalous lack of taste. Earlier this year, I was pleasantly surprised at some fashion from the MTV Movie Awards. I was hopeful that I would be treated to another night of great fashion moments. After all if my girl Taylor swift was attending and performing (which means two outfits) the night would have to have some fashion bright spots, right?

Well, yes and no. There was a certain amount of good taste, which I was very relieved to see. But, as always with an MTV award show there are many pictures that I just won’t reproduce here. I love that fashion allows everyone to express their personality, but I don’t like it when people (let’s be real it’s almost always women) pick outfits that are so uncovered. I’m not saying anyone has to wear a turtleneck or long sleeves. But, come on ladies, if I can see more from your evening gown than I could from your bathing suit there’s a real problem going on.

Here are my picks (the ones that were decent enough to talk about) for best looks, worst looks and whose look needed just a bit of tweaking. 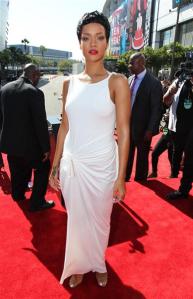 It’s a very pretty dress for late summer! Rihanna did a great job of picking a simple dress that still has her island style flair with the draping of the dress.

I love this outfit so much. It almost makes up for the fact that I had to put Taylor’s other outfit for the evening on my worst dressed list. I love the sailor (and Cape Cod!) appeal of the striped top and shorts. I think a long sleeve top with shorts looks really chic. Hello, look at those cute red shoes, too! I would wear this whole outfit, it would be perfect to run errands in or grab lunch with friends, and it’s adorable.

I love this dress! It’s short, but not too short.  It sparkles, it’s black, and it has a full skirt- enough said. I love that she paired with a studded leather jacket and a pair of seriously cute booties.

Hooray for another adorable black dress. I love the double spaghetti strap, sweetheart neckline. Did I mention that this dress has a full skirt, too? I love it. Her hair and makeup have a vintage flair without looking like a costume. I’ve been a fan of Regina’s style for years. 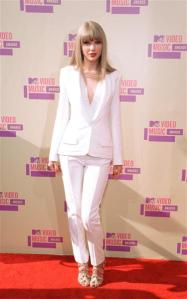 I usually love Taylor’s style so much! But, this look really doesn’t work for me. This look ages her so much. She looks like a soccer mom trying to look hip for a girl’s night out. I know it’s important to branch out and try new looks, but I think this outfit just makes her look old- not sophisticated. She’s definitely worn some sophisticated looks this year (the Grammy’s, Billboard Awards, etc) that didn’t age her in the same way. 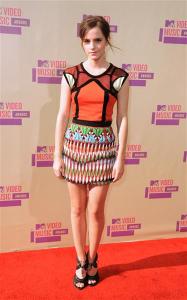 I just can’t say enough how much I hate this dress. I love orange and crazy patterns, but this dress just hurts me to look at. I don’t think color blocking and crochet work well together. This dress is comprised of so many elements and distractions that the sum is not a total of its parts. 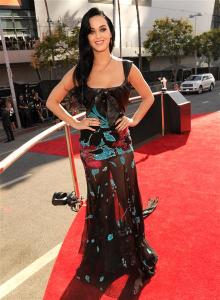 I wish I could love this dress because there are elements of it I like. The cap sleeves and bodice in leather is an interesting twist. I love using blue, black and red together and it’s a combination that’s not seen often.  I don’t actually like the floral beading because it looks a little cheap. What I really don’t like about this dress is the mircomini/leotard underskirt with the sheer black skirt overlay.  I think the two drastically different hemlines make it look very student designer. Using elements of sheerness can add drama to a dress, but they have to be used carefully or it can look tacky. 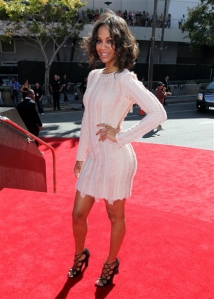 I love the shoes! I have to say that first. I love the shoes (they are Ferragamo, too). I love the shape of this dress. It fits really well and is very flattering without having too much skin showing. The color is a little drab, but not terrible. I like the texture and the edge it gives to the outfit. But, I just think that it’s too bulky and ends up looking like shredded stuffed animals.

I wanted to love this dress, but I just can’t. I love the one sleeve and asymmetrical cut. I just don’t love the color or fabric. It seems so shiny for the structure of the dress. I don’t like that it’s such a dull gold, too. It looks almost putty colored to me. I want to like the dress, but it’s just no a success to me.

The Fab Five (from left to right)

I’m giving the “Fab Five” ( or “Fierce Five”)  their own section so I can break down their looks individually. I think some of the girls look great and some looks could use some work.

I love McKayla’s dress. It’s simple but also very feminine and pretty. Jordyn’s dress and hair actually look a little too mature and age her appearance considerably. Kyla’s dress is cute, but a little generic.   Gabby looks darling! I love the black and gold sequin stripes! Gabby’s hair, makeup and jewelry are also fabulous! Aly’s look is the worst. The dress is too short and is so heavy with texture it actually makes her look heavy (which she is not at all). The pink shoes don’t go with the dress at all. And the evening bag just adds more to an ensemble that already has too many elements.

Maybe it wasn’t a total fashion triumph filled night, but there were still some cute looks!

One Direction- These lads continue to impress.  They still look unique, but like they all belong to the same group, which is a tough thing to do right.  I’m especially intrigued by the Henley shirt over a banded collar shirt.  I wouldn’t have thought this would work, but it did. 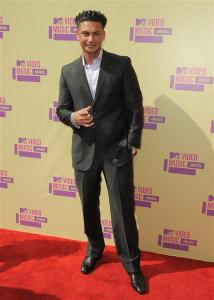 Pauly D- I can’t believe I’m putting someone from Jersey Shore on my Best Dressed list.  But he does look great here.  The suit is tailored very well, and the subtle pinstripe looks  classy.  He’s paid attention to every detail here.  Even his jewelry looks cohesive.  I would wear this whole outfit myself. 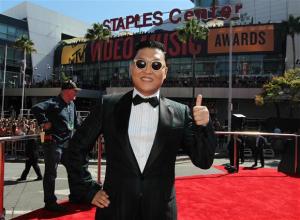 PSY- Every casual awards show has someone who’s overdressed.  Sometimes it works, but most of the time it doesn’t.  PSY manages to fall into the first category.  The cut and fit is great, and even though I don’t know him, this look feels really genuine.

RiFF RaFF- This rapping colleague of Simon Rex is representing seriously occasion inappropriate menswear.  This outfit looks like something that you’d see at Ocean City, not at an awards show. His biggest concern appeared to be showing off his necklace that was cobranded with MTV.  The shorts look like swim trunks, and the tank top would only be acceptable at the beach. 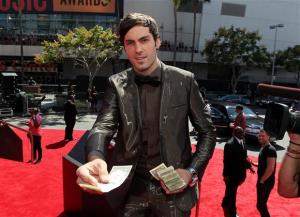 Jeff Dye- This outfit is really bad.  The suit is so shiny it looks like a grandma’s couch.  The fit is off, tight in the arms, and maybe the legs, and too loose on the shoulders.  He also illustrates why I hate bow ties.  This one can only barely be seen, and is too floppy.

Ezra Miller- I don’t even know where to start.  The color of this suit is fine, and the shoes could have worked, but everything else about this look is a disaster.  Men, do not let this happen to you!  Ever.  The closures are too high, and are weird.  The pockets have an accent on them in a different shad of brown.  The weird design across his crotch, down his legs, across his lapel, and at least one sleeve is horribly placed, and doesn’t make sense.  This is not just the worst outfit of the night, but also the worst outfit I’d ever reviewed.

Jackson Rathbone- This outfit is so close to being great.  The monochromatic works for him, and for the most part he looks the part of a modern cool, almost hipster take on a cowboy.  If only his tie weren’t crooked.  It’s ruining the whole thing.  Wait a minute, that’s not a tie!  That’s some design on his shirt that almost looks like writing.  It looks like there’s some other small chevron at his neckline as well.  That really messes things up!

RuPaul- Ru has made is career on being fashionable, so I expected much more from him.  The pants create too much color here, since they conflict with the shirt.  The sandals are the worst part.  They don’t look like you’re going to an awards show.

Ne-Yo- This almost works.  The shirt works well on him, and the camo pants make sense in this setting.  The problem is the feet.  No only do I not like the shoes, but there’s some weird cuff thing going on with the pants that I can’t figure out.

Colton Haynes- This suit is great!  The look of it is really unique for this event, but since we went without a tie, it keeps it a little more casual.  Again, the problem is the shoes.  I just can’t get over the bedazzled slippers.