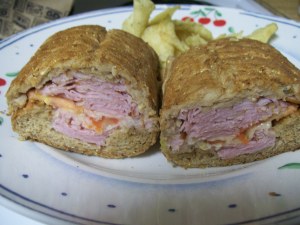 Ham and Swiss on Wheat Sandwich from Potbelly

Potbelly is really cute with all its dark wood and old-fashioned knick-knacks. It can be really hard to find a table, especially a clean one, during peak lunch or dinner hours. They do have live music sometimes, which is really fun. The service is not always the fastest and sometimes they are sloppy when assembling you sandwich. Last night, I found a giant rope of roast beef fat in my ham sandwich- that’s gross. I understand that things can get hectic in kitchens, but I’d rather wait a couple of more minutes to get my food rather than have stray meat fat pieces in my sandwich. They are usually a friendly crew and I’m sure they try their best, but they really need to work with more care, sometimes.

I’ve really experimented with the sandwich meat options that Potbelly has. For a while, I ate the turkey. But, it’s bland and too slimy. Then for a while I ate their “special” roast chicken and cheddar, which was pretty good, but sometimes the meat could be to gristle-filled. I tried the roast beef a couple of times, but it’s very fatty and I usually ended up not finishing it. Now, I’ve moved onto the ham. With the exception of the roast beef fat rope in my sandwich it was pretty good. The ham was nice- not too squishy and not too salty. The Swiss cheese was a nice addition, as were the tomato slices. I’m not crazy about the pickles that they have at Potbelly so I added

I have discovered one thing that is absolutely yummy: Zapp’s Sour Cream & Creole Onion Chips. They are awesome! I love kettle style chips because they are so crunchy. We used to be big fans of the Salt & Vinegar Chips too, but they’ve changed and have too much salt and not enough vinegar.  But, if we just eat the Sour Cream and Creole Onion they are too strong.  I think I’m trying Pop Chips next time!

They have salads and milkshakes, but I’ve never had them. I did have a sugar cookie here once- it wasn’t very good to me. But, I don’t like sugar cookies that much so others might like them. I used to adore their chicken and corn chowder, but they don’t serve it anymore. At least they don’t serve it at my location or in my area.  I used to like their coleslaw because it isn’t too mayo heavy and it’s so well spiced. But, I have too frequently found pieces of cheese from the macaroni salad in my slaw- gross.

It’s really hard to find good fast food. Potbelly does a pretty good job of providing food that you can get in a fast manner that isn’t as bad for you as the typical fast food burgers and fries. I do wish that were more transparent on their website about their ingredients. I also wish that they would take more care in assembling the food- no stray pieces in other dishes, please! But, they do a pretty fair job of the task at hand. Sometimes you just need a meal quicker than the time it takes to order a quiche! 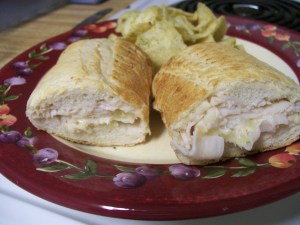 Turkey and Swiss Sandwich on White from Potbelly

Simple and cheap is really what you get at Potbelly.  That doesn’t mean you don’t get good.  Kari and I have shared some great date nights in here.  The décor is shabby chic.  They have musicians play there on Friday and Saturdays.  It’s definitely a cool place.  When they first opened, they had their performers play on a platform that seemed more like a kid standing on a bunk bed.  Thankfully they’ve stopped doing that.

There have been a few foods that they’ve featured before that we have enjoyed along the way.  They had chicken corn chowder that was amazing.  And I’ve really enjoyed both their macaroni and potato salads.  But it’s all love for Potbelly.

Most often we get our food to go because it can get very loud inside.  This means I miss out on the pasta salads because cold mayo based salads don’t travel well next to hot sandwiches.  We used to enjoy their Roast Beef, but now it tends to be very fatty and stringy, so we don’t even order that anymore.

There isn’t better value in another sandwich period.  I’ve never had any problems with the turkey, and find it moist and delicious.  I like the ham too.  And each sandwich is still less than five dollars!  It’s not a gourmet meal, and I can get tired of it if we eat it too often, but compare to other places that market their sandwiches as costing five dollars, it’s practically filet mignon.

They also have a dinner and a movie deal where you can save quite a bit on movie tickets if you know you’re going to be seeing a movie afterwards.

Overall, it’s a fine place if you’re in a hurry, or not looking for anything fancy.

Have you visited a Potbelly location before? Are you a fan of their sandwiches?