She Said: Worst Cooks in America

I love to cook! I absolutely love it. I learned to cook mostly by watching other people and it’s truly one of my favorite activities.  When I first heard about this show I was interested in seeing if there were things that I could learn. I think I’m a good cook, but everyone can always learn more, right? Frankly, I think this show is the worst of all the reality cooking competition shows. I think that because I don’t believe it’s real. Sure, Top Chef or The Great Food Truck Race and other shows may be somewhat heightened reality or edited. But, I think these people are all acting and creating messes for the purposes of television

The concept of the show is that two chefs, Bobby Flay and Anne Burrell, take on 14 of America’s worst cooks and teach them to be able to make food. What I don’t understand from the auditions is who makes food that looks awful to try be on television? I don’t believe that people can really cook that badly. Someone actually made himself gag on his own food. One lady actually cooked with dog food. I just don’t believe it. If you wanted to call this a surreal cooking competition and I wasn’t expected to believe it then maybe it would work. But, I just don’t believe people who are really trying to cook can cook that badly.

The contestants seem too stereotypical to even be real people. Seriously? A loud Texan cowboy, the accountant with the glasses and bowties and a ballerina, are just some of many stereotypes that are just a little too over the top.  Where did they find these people? Because it looks like a casting call for “unique types”. I also really don’t like that one contestant can’t get through a moment in Bobby Flay’s presence without flirting, squealing and fawning in an absolutely embarrassing manner. I don’t think that these people are real, or at least that they aren’t playing an extremely heightened reality version of themselves. I don’t know what irritates me more the fact that I think these people are acting or that they are doing such a bad job at it.

I was hoping to at least discover some good recipes. But, everything was already either too basic or had alcohol in it. Since, I can’t have things with alcohol in them it really disappointed me that I couldn’t even pick up a recipe from watching the episode. 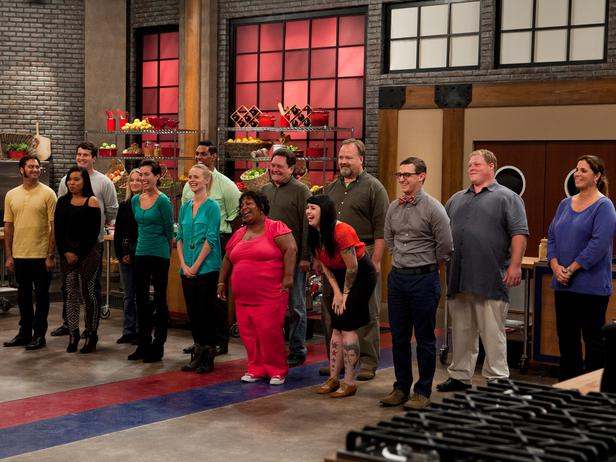 The “contestants” on Season 4 of Worst Cooks in America-   image from
http://blog.foodnetwork.com/fn-dish/2013/02/worst-cooks-in-america-culinary-quiz/

He Said:  Worst Chefs in America

Kari and I had always stayed away from Worst Cooks in America.  After watching the premiere episode last night, I can’t really say why.  I am however glad we tuned in this time.

The premise is entertaining enough.  Really bad cooks who realize that they need help come to boot camp to learn how to cook.

This first episode included both the casting, and the first official challenge.  The casting was quite amusing and even featured one contestant that made himself gag on the smell of his own food, and a woman that burns everything so that she knows it’s cooked.

It’s pretty crazy stuff.  These people are clueless.  I’m not the cook in the family, but I know a lot more than most of these inept people.  Which is where the fun is, here.  Most cooking competition shows focus on how elevated the cooking can be, but here a sly wink and nod is shared with the audiences about just how low the level of cooking is at this point in the competition.

Anne Burrell and Bobby Flay make great team captains.  They are helpful to their charges, but also seem bemused at how illiterate they are in the kitchen.  Their cooking demonstrations are hands down the best part of the show.

The most challenging part of a show like this is to not come off as condescending or mean.  It wouldn’t help any of these poor people if they were screamed at by Gordon Ramsey.  People just don’t learn that way.  Somehow Anne and Bobby, and by extension the show as a whole, pull off the right tone to keep the show positive.  Maybe some of that comes from the contestants being in on the joke.  No matter how defensive they are on the show, they must know they’re bad cooks.  Who else would try out for a show called “The Worst Cooks in America?”  It must help too that the promise here is to help you get better.  Yes, Food Network is going to show all of your mistakes along the way, but once you’re done you’ll look back and laugh too.

I did feel sorry for one of the eliminated contestants this week that clearly wanted to learn how to be a better cook.  She even offered herself up for the next season of the show.

It’s a little early to have a clear favorite, but you’d have to be blind not to notice Carla as the breakout star here.  Carla has a slightly inappropriate love of Bobby Flay, and lost one of her fake fingernails in the enchiladas that she made the judges.

Voting is still open ( until 12:00pm Eastern on February 20th) for this month’s “Choose Our Adventure”, where readers get to determine a future blog post! Check it out and vote on a future date night that we’ll share all the details about! Vote now

← On the Road: Adventures: Virginia Musuem of Fine Arts
Choose Our Adventure: Results of February/March 2013 Vote →