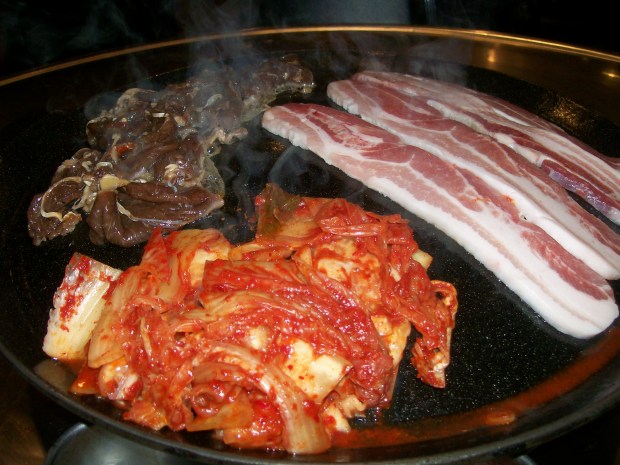 RJ and I had wanted to go to Honey Pig, a local Korean BBQ restaurant, for a long time. When we saw a Living Social voucher that was a good deal we thought it seemed like the perfect time to try it. I have never been so disappointed in a restaurant in my life. We had a terrible experience and I can’t imagine ever going back.

Honey Pig is loud. Very loud. It’s so loud that I had to shout at RJ to be heard a few times. We aren’t really very soft-spoken people so that really stressed me out. From the minute you walk in you are inundated with loud Korean pop music. At first I thought it was neat because I heard a Korean cover of Duffy’s song “Mercy”, and I love that song. But, the dancing in the video was very suggestive and the outfits were too skimpy. It actually made me really uncomfortable to be standing around or eating while these really tacky videos played. I don’t watch most music videos, American or otherwise, because I don’t like to see that kind of dancing.  I certainly don’t want my husband to see it either. The videos were too loud and much too suggestive.

The tables are uncomfortable, and most of them are outfitted with a grill where the servers cook your food. The chairs are small, the tables and menus were sticky and dirty. It’s not a fun, pretty or relaxing place to be. It’s not even interesting past the first few minutes. It’s just loud and dirty.

The service was terrible. The menu doesn’t really explain what anything is (like the little side dishes they bring you) and that was really stressful. I have food allergies and some diet restrictions so I have to be careful when I’m dining out. We tried to ask the servers who gave us food what things were and we didn’t get answers. It’s very frustrating to just be told that something is a salad. But, I need to know what’s in it in case it could make me sick. If the staff isn’t able to convey what items that people could be allergic to the guests then they need to get new menus that explain the items. Also we had no idea in what order to eat anything, it would have been nice if the menu could have explained that, too. Another problem that I had with the service was that the people cooking on the grills were not careful enough with their utensils. Several times I would see scissors and spatula lying near the cash register (ugh!) and then they would be used on our food! They were also not careful about using different utensils for the cooked meat and the raw meat. You have to use separate utensils because I don’t want the bacteria from someone else’s uncooked meat on my cooked meat. It was a very upsetting and stressful experience.

When it came time to order RJ knew he would order Bulgogi and I knew that I would get pork belly. As I’ve mentioned earlier we were served many dishes that we had no idea what their purpose or ingredients were. First, we were given a salad that was some kind of mixture of lettuce, onion and maybe soy sauce. I gamely took a few bites. It didn’t taste good and when I felt the telltale itching of my hard palate I quickly took a drink of my soda. My water glass didn’t look clean so I was very thankful that we paid for canned sodas.  I didn’t try any of the other side dishes after that. I also saw one of them had crab in it and that could have been very bad for my shellfish allergy.  I was still trying to be hopeful for the main course. The Bulgogi (beef)  was tender and flavored well. I didn’t like the dipping sauce for it though- it tasted so much like alcohol. The meat was better plain because the seasoning was so flavorful. My pork belly was really, really bland. It tasted like an unseasoned pork chop. The crispy edges were nice, but it was really boring. I only ate several pieces because I was so hungry. I was excited for the kimchi because I love kimchi coleslaw. Well, it turns out that I only like kimchi in kimchi coleslaw. Kimchi alone tastes so awful to me that I nearly spit it out. I didn’t want to be rude so I managed to get my bite down. The kimchi was so flat, bitter and pungent that it was really work to eat even one bite. The rice was pretty good, thank goodness.

I really wanted to like this place because I do like trying new food. I usually love Asian cuisines, too. Four Sisters (Vietnamese) is one of my favorite restaurants in the whole world.  I also love, love, love BonChon, I could eat the chicken legs and kimchi coleslaw anytime. But, I guess I don’t like Korean BBQ or maybe I just don’t like the Honey Pig experience. Bad tasting food (that I don’t know what the ingredients are comprised off), bad service, uncomfortable dining room and salacious music videos are a toxic combination for me. I would never want to visit again. It was a terrible experience that caused us to waste money and gave me an upset stomach.  If you want tasty Korean food- go to BonChon! 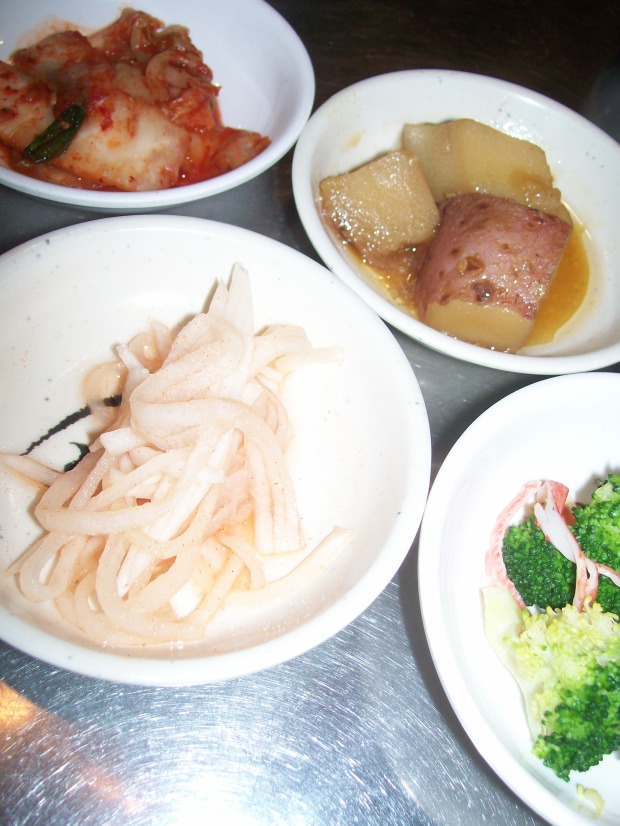 I really enjoy going on ethnic food adventures.  Since we can’t afford to travel all over the world, one of the benefits of living in the DC area is that you have so much foreign food close by you can experience the world and not actually have to travel.  As we’ve documented here we love both Vietnamese food, and Korean fried chicken.  So I’d been dying to try Korean barbeque.  After all, if we like their fried chicken, we’d probably like other food too right?  They cook the food at your table, which I’m always a fan of and I’m also a lover of barbeque so Honey Pig was a no brainer.

From the moment you walk in Honey Pig is very different from most restaurants.  There is a very industrial feel to the décor.  The inside mainly consisted of metal walls and flat screen televisions showing nonstop K-Pop videos at very loud volume.  At first, I thought this was cute, but soon realized that the videos were as inappropriate as American music videos, and the music was so loud it made it very hard to carry on a conversation.

I ordered the Bulgogi because we’d seen John make it on John and Kate Plus 8 and had enjoyed a previous taste of a bulgogi sushi roll at the Taste of Vienna last year.  The sushi roll had a sweet taste to it, but this had the taste of alcohol that had not cooked off enough.  The dipping sauce that was provided for us accentuated that taste.  Kari ordered the pork belly.  After all the raves pork belly usually receives on Top Chef, this was our second disappointing experience in the real world with pork belly.  It wasn’t very tender, and wound up feeling like a fatty pork chop.  There were also several sides that were delivered to our table in small dishes that we couldn’t identify, and a salad that we couldn’t determine what was in it.  I burned my mouth on the kimchi, but given time, that’s the one item I think I could enjoy.

This was a very foreign experience.  Somehow, other foreign cuisine we’ve tried always has seemed so accessible.  That was not the case here.  We were not just sampling this other culture, we felt dropped in it without knowing the rules.  The wait staff means well, but they’re not very helpful as guides through this new experience.  Adding to the foreign disconnect were some cleanliness issues with preparation.  The tongs they use to move your food around the cooking surface and the scissors they use to cut it into edible portions are used for every patron your waiter is waiting on at that time.  This is food poisoning waiting to happen.Kari noticed this before we sat down, and I did nothing.  We should have left.

Kari, I’m sorry that I subjected you to this experience and please know that it will be the last time we try this kind of cuisine.  This type of food is just not for us.