I’m not the biggest fan of sandwiches. I know that statement may seem surprising. But, I just don’t like them- for the most part. I hate mustard and mayonnaise. I don’t like sliced cheese.  So, I guess I should say that I don’t like traditional picnic or homemade sandwiches. I love chicken sandwiches! Because we are trying to conceive (TTC) I can’t have any cold lunch meat, not that I’m a great fan of lunch meat. I do really miss chicken salad, about three times a week. But, I digress. I love sandwiches that have great veggies and protein, and that can be toasted and still taste fresh and good. RJ really wanted to try Taylor Gourmet for some time, but I didn’t really think the menu looked that great. But, we needed a lunch after church and I relented, but I never should have!

The concept of the restaurant feels like an over-priced, faux industrial sandwich shop. All the sandwiches have names, which is actually confusing. What really annoys me is that even after picking the name- there are still a multitude of questions to answer. Maybe they need a different ordering system, because it’s very irksome. I’ve also never been to a sandwich restaurant that took so long to serve up food. We waited over ten minutes for two sandwiches. I need a warning for how long it’s going to take if you are going to make me wait that long for a sandwich- so I can leave!

I hate the way the restaurant looks. When we first glimpsed it, I was skeptical and actually checked on a restaurant across the street to see if it was open.  They have a huge window that opens into the sidewalk, which is sad because I kept looking across the street at another restaurant wishing I was there. It’s decorated in a very industrial style, but not in a slick, cool way. There was stuff (soda, something sticky, etc.) on the walls- gross! The tables and chairs are so uncomfortable. We actually had to sit at the tall tables and sit on stools- yuck! I like to wear dresses and skirts and I do not- listen up, restaurant designers- want to sit on a stool! I’d like to maintain my comfort and my modesty if you expect me to frequent your eating establishment. But, my biggest critique of the ambiance of was the fact that they played the same song over and over! They literally played one bad dance/techno track over and over again. It’s absolutely appalling to charge 20 for two sandwich lunches and make me sit on stool, wait over twenty minutes and listen to the same song for a half-hour! I wouldn’t go back to Taylor Gourmet just because of the ambiance and we haven’t even gotten to the bad food!

Because I love chicken sandwiches so much and it was an option that would be served heated I ordered a chicken sandwich ( my version was called Walnut Street). This was the worst chicken sandwich that I’ve ever eaten. The meat was tough, bland and spongy. I love crusty bread, but this bread was too chewy and was also flavorless. The mozzarella cheese was cut into tiny cubes, which is really annoying because when it’s chopped that small it’s just squishy and annoying. I love mozzarella cheese and they found a way to prepare it that made me dislike it! The sandwich was also served with what were supposed to be roasted red peppers. If indeed they were roasted red peppers, which I doubt, they were the least roasted red peppers I’ve ever had. They tasted raw and the pieces were quite hard. This was quite possibly the worst chicken sandwich that I’ve ever had.

RJ had some roasted pork sandwich that I was barely able to even eat a bite of, it was bad.

The chips were Herr’s chips: a brand that I don’t like. They were somehow completely coated with sticky powder, yet completely tasteless. I had sour cream and onion potato chips and I couldn’t actually taste the flavor. RJ’s BBQ rib flavored chips were slightly more assertive, but were still flat.

I can say only one good thing about Taylor Gourmet and that is that the fountain sodas are very good. My ginger ale had the nice spicy ginger taste, but was lighter and crisper than most bottled ginger ales.

I enjoyed the ginger ale and that was absolutely it. I can’t imagine going back to Taylor Gourmet for any possible reason. 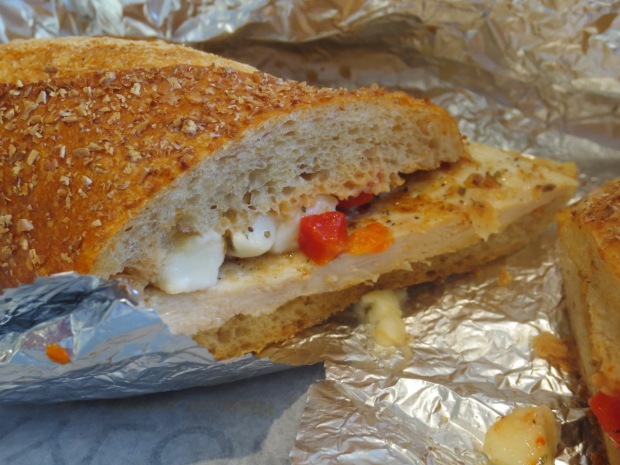 I’ve been dying to show Kari around the Mosaic District ever since it opened.  I drive by it every night coming home from work, and love finding new things for us.  Sometimes I find great things that we love for years, like Four Sisters.  But I’ve also found some pretty bad places too. Taylor Gourmet falls into the pretty bad category

I ordered the Washington Avenue, a simple sandwich of pork and provolone cheese.  Kari ordered the Walnut Street, a chicken cutlet with roasted red peppers and fresh mozzarella cheese.  We both “Taylor Made” our sandwiches by adding a drink and a bag of Herr’s chips.  Don’t do this.  The chips, both flavors we had were lacking in any taste whatsoever.

My pork was delicious.  The in-house roasting process includes some spices that give this sandwich a real nice kick.  The pairing of the sharp provolone cheese worked well.  A mellower cheese wouldn’t have been able to stand up to the flavor of the pork, so the more assertive provolone definitely adds something.  While the taste was great, the serving size was not.  I know I ordered the six-inch, but it seemed stingy on the meat.  If I were to eat here again, I would skip the chips and get a large.  The Puck’s root beer that they serve from the tap was great root beer.

Kari’s sandwich wasn’t very good.  Why does a place that prides itself on preparing so many of it’s own meats even offer a chicken cutlet?  This stands out like a sore thumb.  My sandwich felt lovingly prepared, hers felt thrown together.  The roasted peppers also tasted and felt raw in your mouth.  The mozzarella is cut up into small cubes, removing any of the joy you get from biting into a nice thick disk.

The overall experience was pretty bad too.  We had to wait 20 minutes for our hot sandwiches as just about everyone else in the restaurant went up and got their order filled ahead of ours.  If the wait is going to be that long, they should tell you.  I’m glad that I didn’t order one of their hot sides in the hopes of that tiding us over until our food came up because they serve those at the same time too.  The dining room is uncomfortable and cluttered with confusing long tables.  They also played the same song on loop for 15 minutes before playing another one.  They clearly want you to grab your sandwich and leave, or take advantage of their heavily promoted catering option.  If I were to ever eat here again, I would get a large to go, by phone and wait a while to go pick it up.  If that’s what you’re looking for in a dining experience, you’ll enjoy it, but otherwise, it’s not worth the hassle.