Walking up to the stadium!

We always appreciate our readers and we especially love it when they participate in our blog by voting to send us on adventures. We’ve had some great adventures in the past and we look forward to more in the future! Last month, we had a sports-themed vote and were sent to attend and throw out the first pitch for a Potomac Nationals Minor League Baseball Game.

We’ve been to a P-Nats game before, but it’s always exciting to drive up to the stadium.  Unfortunately, it was a very unseasonably cold day! Cold weather (or too warm weather) is really hard for me to handle. I was very excited to be there, but I struggled from before the game started in spite of wearing layers. Weather isn’t anything that can helped, but unfortunately it can’t be avoided either. We also were seated behind home plate, for the first time. While I can understand that the view is probably something that many would enjoy, I have to say that I enjoy being by first base more. I feel the views are just as good (the netting actually hurts my head- or at least trying to look through it hurts my head. Also the seats are really, really tight. I’m used to sitting in tiny theatre sites, but I’ve never sat as closely to another human before Saturday night. she jostled me every time (which was frequently) that she tapped out a message on her phone. It’s a lot of fun to see a minor league game, but my advice is to get a seat near 1st base and go on a warm, but not too hot night.

Food is one of the most fun parts of attending a sporting event. I had to have a box of popcorn. And it was wonderful. It was hot, salty, buttery and crisp. Eating popcorn at an outdoor event is one of my favorite things. I thoroughly enjoyed my popcorn. I know it may sound simple, but it’s a ballpark fave and it’s so well done, I can’t underestimate the importance of popcorn!

Recently, Pfitz Stadium made some new additions to their food offering with three new stands. Blueberi Yogurt offers up sweet treats. We sampled the chocolate and it had pretty nice flavor. My one criticism for the yogurt is that it’s frozen so solid that eating it in anything less than sweltering conditions is difficult because it’s so cold and hard. I did love that you could have unlimited toppings and they had quite a variety of candies, fruits and nuts to pick from.  Soul Wingz serves up a variety of deep-fried foods. I was most attracted to the corn dog and RJ got one as well. Overall, they were good. Mine did have a few blobs of raw batter on the inside. But, it did have a nice crispness to the outside and the batter had a nice cornbread flavor. I don’t usually eat sausage (like at all) because I don’t like it and it upsets my stomach. RJ wanted to sample something from Logan’s Sausage Grill and after several items were sold out, he finally settled on a Polish sausage. I’ve always been particularly wary of a Polish sausage just because I couldn’t imagine the taste. But, I did try one tiny bite. It was a softer texture than I expected and the flavor was subtler than I expected. I wouldn’t want to eat it again. But, I hate almost all sausage products, so take RJ’s recommendation more seriously than mine if you do like sausage.

Because of how bad I was feeling, we weren’t able to stay until the fireworks. I was so bummed to miss the fireworks because they are AMAZING! I love the awesome display and seeing the fireworks is always a highlight of a P-Nats game! Make sure to stick around for them if you can!

We want to say thank you very much to our friends at the Potomac Nationals and our readers for sending us on this adventure. It was an awesome moment to step on the pitcher’s mound and throw out one of the ceremonial opening pitches. It’s always great to hear your name announced! I got a little nervous so I probably could have thrown a better pitch. But, my pitch ended up going further than RJ’s did! It was a really neat experience and I now have a souvenir of a baseball that I threw!

Sausage- 4 ( for what it was and not being a sausage fan, it was okay) 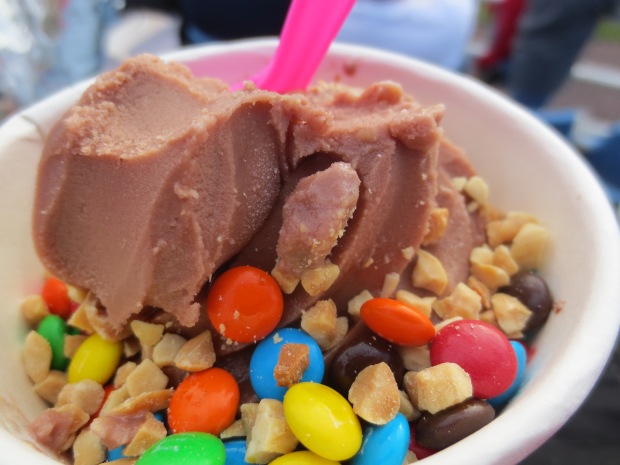 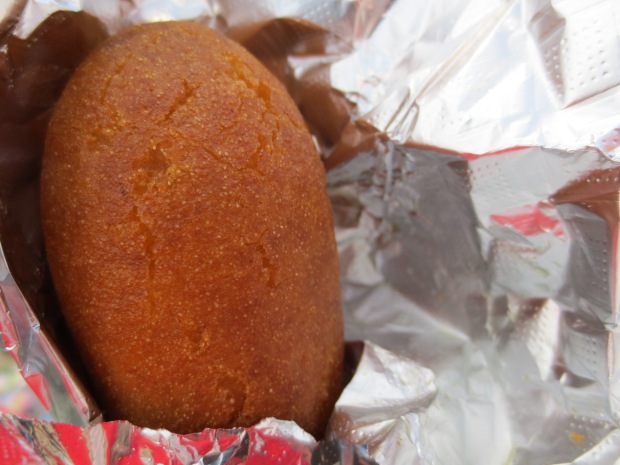 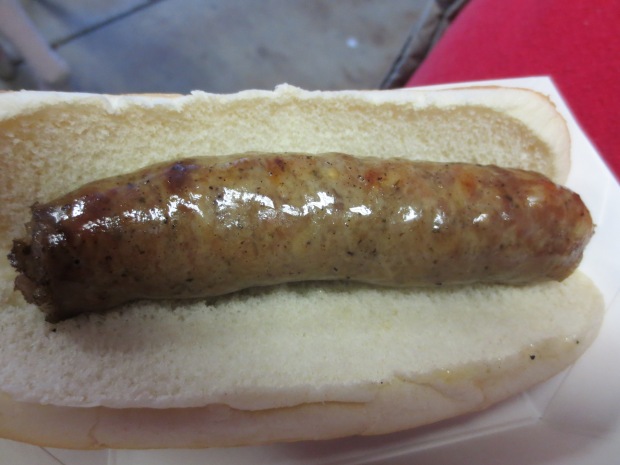 This Month, you readers voted for us to go to a Potomac Nationals game and throw out the first pitch and enjoy the game.  Thank you all so much for voting.

Throwing out the first pitch was fun.  After the three other people that were throwing out the first pitch Kari and I each threw out a pitch and we got to keep the balls we threw.  Isn’t that part cool?  I have to admit; Kari’s got a lot farther than mine did.  If I ever get to do this again, I’m going to have to train first to actually get it all the way to the catcher!  After that we moved on to sampling the food at the various stands.

We started with a corn dog from Soul Wingz.  They had a lot on their menu, but we decided that an old favorite, the corn dog looked the best.  The hot dog was good and juicy, and the batter was nice and tasted just like corn bread.  This may be a little weird, but my favorite part was that the stick wasn’t pointed on the end.  I’ve had a lot of corn dogs where I was worried about puncturing myself with the stick with every bite!

Next we tried the chocolate yogurt from Bluberi.  It tasted wonderful, but was frozen solid.  It tasted smooth and rich, and nicely, but not overpoweringly chocolate.  It made me really want to try fresh yogurt from them!  Next time, I’ll make sure to let our serving thaw more before eating it.

Later we tried some of their popcorn from the snack stand and it was tasty and hit the spot.  We finished off our food experience with a Polish Sausage from Logan’s Sausage.  They were seasoned nicely, and had a slight kick, but were still pretty mild.  The casing was a little thick for my taste, but I would still eat one of these again.

Kari wasn’t feeling very good, so we left after we ate our sausages.  Unfortunately, we didn’t make it to the seventh inning to sing take me out to the ball game, or see the fireworks after the game, or the movie that was being shown after that.  I can tell you from previous experience that the fireworks are awesome, and make the ticket you buy all the more worth it.

I want to thank the Potomac Nationals for the box seats they gave us.  We did however have some problems with viewing the game that had nothing to do with them.  That leads me to some overall tips to get maximum enjoyment out of your trip to the ballpark.

If you’re sensitive to sound, sit further out, for example close to first or third base.

Pack yourself a backpack with things you might need.  Remember that this is an outdoor event, so you may want to include blankets, or jackets.  I would also include sanitizer.

If you have any extra needs that couldn’t make it into your backpack, think carefully about how to store them.  If you need crutches for example, you may want to consider getting a seat in a front row where you have easy access to them. Our recent visit was made very uncomfortable because a person seated near us had crutches and felt our seats were the best place to storm them and was angry every time that we moved them (or ourselves)- this lead to a lot of tension.

If you follow those simple guidelines, you’ll definitely maximize your enjoyment, and that of others.

I really love baseball, and watching baseball, so thank you guys once again for allowing us this experience.

One thought on “Choose Our Adventure: Potomac Nationals Baseball Game”