On Stage: Toby’s Dinner Theatre of Columbia: In The Heights

If I’m not performing than I love the chance to see others perform. I especially like to see performances that are full of exuberance and great music. Toby’s Dinner Theatre of Columbia’s production of In the Heights is wonderfully bubbly and encouraging. The story focuses on a young man, Usnavi, who owns a bodega in Washington Heights. He and his friends struggle with the issues of poverty and identity with an inspiring amount of hope and confidence. Toby Orenstein and Lawrence B. Munsey helm a production that still has me singing the songs.

I was curious how it would be to see someone other than Lin-Manuel Miranda play Usnavi. David Gregory did a great job and I was very pleased with his ability to bring his character to life. Singing a part is one thing and rapping is another. But, he did a wonderful job of being articulate and fluid. He was also so earnest and likable that I wondered if anyone couldn’t like him! The cast did an admirable job of creating a world full of characters that I cared about.  The standouts for me from a performance perspective were Alyssa V. Gomez, Nadia Harika, Crystal Freeman and Tobias Young. Alyssa V. Gomez played Nina with such a lovely radiance and a beautiful voice that it was a pleasure to watch her. Her renditions of “Breathe” and “Everything I Know” were stunning.  Nadia Harika’s portrayal of Vanessa was thoughtful and conflicted, which perfectly suited her character’s journey.  Crystal Freeman was both physically perfect and vocally enriching for her portrayal  of Aubela Claudia. My favorite character in all of In the Heights is Piragua Guy (I know that may be weird, but I love him) and Tobias Young turned in a spirited and joyful performance that made me literally smile with delight.

The music of In the Heights is a blend of salsa, hip-hop, pop and traditional Broadway music. It results in a very fresh and modern feeling show. The choreography for the show was very good. While there were a few moments that were a little too “grinding” for me, it was still so much more tasteful than dancing on television. The ensemble did a great job injecting energy into the production through dance.

The set was beautiful and very atmospheric. I was surprised that the show was going to be performed in the round. But, the set literally surrounded the audience and was very immersive.  I felt very much like I was transported to an old neighborhood in New York.  They didn’t overuse fog or strobe lights, which I really appreciated. Sometimes shows overuse both of these elements and make me sick (Les Miserables National Tour- I’m looking at you), but the use and ventilation was properly executed at Toby’s.  The props, especially Piragua Guy’s cart were well very executed.  I loved the costumes! They did a great job of telling the audience so much about the characters and their environment. But, they were also pretty! Seriously, I could have gone shopping from within the costumes of this show and picked out some truly lovely things. Some of the outfits were a little immodest (especially one odd black Madonna style sheer top), but I really loved almost everything that Nina, Vanessa, Daniela and Carla wore and some of the ensemble, too.

I have only been to a dinner theatre before 3 other times. I’ve not always had a good experience at them, so I was a little skeptical. But, I was very pleased with the performance. The food was a little harder for me to be pleased with. I really enjoyed the make your own sundae bar. The ice cream was good and the toppings were, too. As for my dinner, I was less satisfied. I ate the Dominican chicken, which was pretty good- however I got a little concerned about the spices and so I didn’t keep eating it because I was worried about cilantro. It would be great if they add cilantro to their ingredients lists for allergy sufferers. Also, I love spinach and I couldn’t try their signature dish because it had mushrooms. The carved ham and roast beef were both very tasty. I discovered that I like both Munster cheese and braised cabbage.  I was really disappointed in the breadbasket, too. Overall, I think that for someone with multiple food allergies (mushrooms, shellfish, cilantro and a few others) dinner theatre and buffets in general are tough.

I do have one other tiny complaint about the evening. The tables are not super-large and it’s hard to have food, drinks, breadbasket, etc. as well as programs. There are tiny votives on the table that really just take up room. It would be nice to have even that much extra space. Also when they came around to bus the dishes before the show started someone emptied our table’s dishes and also grabbed the candle to extinguish it. The problem was that they left a trail of chocolate from who knows who all over my program, folder, water glass and table. I would really prefer to not have a candle if it will have to be extinguished in a way that ruins my program and makes my table a mess the rest of the night.

In the Heights is a wonderful show and Toby’s Dinner Theatre’s production is a visual treat that will leave you inspired about the future. You’ll be singing “96,000” and “No Me Diga” for weeks! 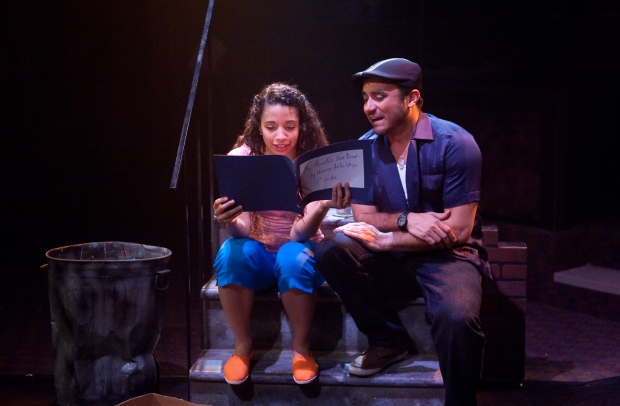 I’ve always wanted to try find a good dinner theatre.  So when we heard that In the Heights, one in a long list of shows that I love the music from but have never had a chance to see was going to be playing locally, at Toby’s Dinner Theatre in Columbia, Maryland, I jumped at the chance.

Dates always seem to include dinner and a something, but plays these days start too early to get a nice meal, unless you live very close the theatre, and there’s something good nearby.  But, this only works if the food is good.  I’m very happy to report that the food is in fact good at Toby’s.  The carved meats (roast beef, turkey, and ham) were all very tasty.  They had a couple of neat things on the buffet too that were a nod to the Latin overtones of the show.  Abuela’s Pork Goulash was really tasty, and the pork was super tender.  My favorite entree was probably the Dominican Chicken, which had an assertive Latin flavor, but not enough to turn off people unfamiliar with that style of cuisine.  I preferred the make your own dessert bar to the cheesecake.  Their Famous Spinach Funque was unique, but the mushrooms were very prominent, so if you don’t like mushrooms I would stay away from that.  The bread at the table wasn’t very good, but overall, the whole meal was enjoyable.

So now that I’ve talked about the food, what about the show itself?  After all, both parts should be enjoyable too, right?  Toby’s Dinner Theatre’s version of In the Heights directed by Toby Orenstein and Lawrence B. Munsey had many enjoyable moments.  Musical Director Cedric D. Lyles met the challenging score and inspired great performances from the entire cast.  However, the play suffered from Drew Dedricks’s sound design.  There were many times where it was hard to hear the fast paced, and sometimes Spanish raps of the main male characters. The set designed by David A. Hopkins made you feel like you were actually right in the middle of Washington Heights.

The performances were also top notch, especially the male performers.  Since this musical has a lot of rap in it, that can be hard to reproduce.  Since Lin-Manuel Miranda wrote the rhymes, and the beats and added his own personal flow to the songs, but David Gregory does a fantastic job making the character his own while still staying true to the character that Miranda created.  The original cast I’m sure had some input, which creates the same problem with all the male leads, but Ryan Alvarado (Sonny) and Marquise White (Benny) overcome this issue with aplomb.  White shines brightly on “Benny’s Dispatch.”  David Bosley-Reynolds also showed a lot of heart during “Inutil (Useless)” really adding to our insight of the abrasive Kevin.  There’s a lot of fun music here as well.  “No Me Diga” was greatly entertaining, as was “Piragua.”  So many songs that I’ll be singing long after the show.

Overall, it was a great night at the theatre.

One thought on “On Stage: Toby’s Dinner Theatre of Columbia: In The Heights”